Like every Jewish community, Whitefield has its own particular twists in the way it marks various festivals, celebrations and memorials.

Here we have an overview of the main festivals together with some information on how the Whitefield community celebrate. 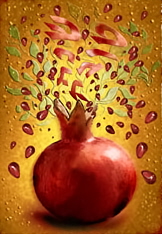 Pomegrantes are a traditional fruit at Rosh Hashanah

Rosh Hashanah translates as “Head of the Year’. This festival marks the Jewish New Year and begins with ten days of repentance and self examination, during which time G-d sits in judgement on every person.

This is a two-day, high holy festival during which we observe the majority of the restrictions of Shabbat. There are special services at the synagogue. The Torah commands us to sound the Shofar on Rosh Hashanah and a person should hear 100 blasts from the Shofar on each day unless the festival falls on Shabbat.

Yom Kippur means Day of Atonement. One of the holiest days of the year, it is a time for introspection, self-correction, prayer, and repentance. 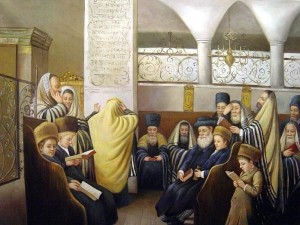 The Torah instructs us to fast on the 10th day of the month of Tishrei and to refrain from work on that day like on Shabbat.

The Yom Kippur fast is the strictest of the year. The fast lasts for the entire the day, from sundown on the eve of Yom Kippur till nightfall the following night, a period of 25 hours. Children begin to fast as they reach maturity, that is boys at the age of 13 and girls, 12. Jews spend the day in prayer asking for forgiveness and resolving to behave better in the future. 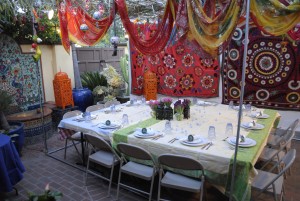 Its not always so warm in England, as it seems to be in this nice Succah

This festival lasts for eight days, with the first two days and last two days being high holy days, and the middle days are Chol Hamoed – days when we can continue to go about our business as usual.

This festival commemorates the wanderings of the Jews in the wilderness after their Exodus from slavery in Egypt. During their forty years in the desert, they lived in small huts or booths.

We build booths of wood and branches outside our homes, and decorate them with pictures and hanging fruit. This is called a Succah. In essence a succah is a four-walled building with “schach” (leaves and branches) as a roof. Schach is made of any plant material that grew from the ground, such as tree branches or corn stalks.

In the synagogue service we use a Lulav and Etrog, a bundle of various leaved braches and a fruit that looks like a large lemon, which we parade around the synagogue.

It is traditional for men to have their meals in the succah, and some will also sleep in it,  for the whole period of the festival. 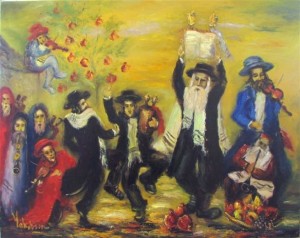 The holiday of Simchat Torah , occurring at the end of Succot, celebrates both the completion and the beginning of the Torah. Simcha means rejoicing and thus we are celebrating reaching the end of the Torah, and beginning it all over again. The Torah contains the laws given by G-d to Moses and the Jewish people at Mount Sinai.

One of the main customs during Simchat Torah is appointing a Chatan Torah and Chatan Bereshit.

“Chatan Torah” (Bridegroom of the Law) is the title given to the individual who is called to the Torah with a beautiful chant – describing his greatness in glowing terms – and is given the honour of reciting the blessing over the last section of the Torah to be read in the current year.

The “Chatan Bereshit”, “Bridegroom of the (Beginning of the) Torah”, is called to the Torah with a similar introduction. He is given the honour of reciting the blessing over the beginning of the Torah, the section dealing with the creation of the universe by God. 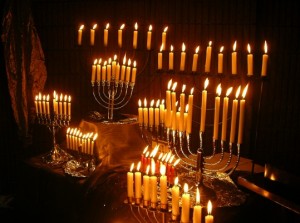 A multitude of Hanukkah Menorahs

This festival is celebrated in memory of the victory of the Jewish rebellion against the Greek suppression. Chanukah literally means “dedication” and commemorates the re-dedication of the Temple and the miracle of the burning oil. This is where the oil of the menorah (the candelabrum in the temple) miraculously burned for eight days, even though there was only enough oil for the one day.

The central requirement of Chanukah is the lighting of the Menorah. The Chanukah Menorah has eight lamps in a perfectly straight line, plus a ninth lamp, the Shamash, which is separated from the others.

The custom is to light one candle on the first night, two the second night, and so on, until the 8th night when all eight candles are lit. The common custom is for every member of the household to light their own Menorah. It is also traditional to eat foods fried in oil, such as donuts and latkes, and to exchange gifts.

The time for lighting the Menorah is at nightfall, when the stars come out. 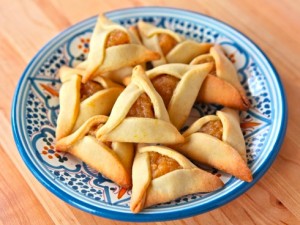 The traditional Hamantaschen biscuit, a reminder of Haman’s tricorn hat

Purim is the holiday commemorating the miraculous salvation of the Jews recorded in Megillat Esther, “The Book of Esther”, which took place during the period of the Babylonian exile. The story tells us King Achashveirosh had an advisor, Haman, who plotted to kill the Jews. His plans were foiled by the efforts of the righteous Mordechai and Queen Esther.

The word Purim comes from the word Pur, which means “lot” and refers to the evil doings of Haman who casts lots to determine on which day he would kill the Jews of Persia.

All Jews – men and women – are required to hear the Megillah reading twice on Purim, once at night and once by day. The reading by night cannot begin until it is dark, which in Jewish terms means that one can see a minimum of three stars in the sky.

It is the tradition at Purim to wear fancy-dress costumes, and for adults to get drunk! It is a fun time, when families come together to really celebrate. 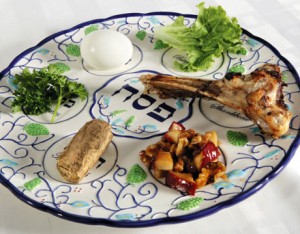 Passover (Pesach) commemorates the liberation of the Children of Israel who were led out of Egypt by Moses.

The first two days and last two days are Yom Tovs with the middle four days called Chol Hamoed, during which we can carry on our daily lives as usual, as long as we follow the strict dietary requirements of the festival.

It is forbidden during the festival of Pesach for Jews to eat ‘chometz’. Chometz refers to any item that has risen, along with most grains and, in the Ashkenazi tradition, also beans and peas. We are forbidden to eat, drink, possess or even derive benefit from chametz. Jews can transfer ownership of his/her chametz  to a non Jew and can buy this back after the festival has terminated.

Matzo is the only form of ‘bread’ which is permitted on Pesach. The dough for matzo can only be made from flour and water.

On the first night of Pesach (or, outside of Israel, the first two) we are required to perform the Seder. The Seder is a dinner, during which we follow an order of service. We are commanded to teach our children that we were slaves in Egypt, and were freed by G-d. In order to make it easier for children to appreciate the story, certain items are eaten to demonstrate the hardship of the slaves in Egypt. We dip food into salt water, for example to replicate the tears of the slaves.

We follow the service for the Seder in a Haggadah. 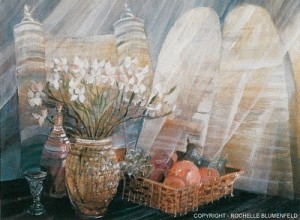 It commemorates the receiving of the Torah, on Mount Sinai. It is a joyous Yom Tov, and the Shul is usually decorated with plants and flowers.

When the Jews accepted the commandments they were promised ‘The Land of Milk and Honey’ – Israel. To symbolise this, we enjoy dairy and sweet foods during Shavuot, with cheesecake being a particular favourite.