Margaret and Milton Jeffries. First wedding of the WHC in the original school building.
June 28th 1961

It would seem that even going back to Biblical days, the act of marriage was accompanied by some ceremony: Jacob was told to fulfil the bridal week for Leah before he could marry Rachel and at a later period King Solomon gave his courtiers the seven days of his wedding feast to solve a riddle.

In some families, the engagement celebration is marked by the breaking of a plate and the broken pieces distributed to members of both families – This is called “tena’im”.

In Talmudic days the marriage was performed in two parts; Kiddushin (the betrothal ceremony) was carried out one year before Nissuin, the actual marriage ceremony.

At present these two ceremonies are carried out together under the Chupah (wedding canopy), separated by the reading of the Ketubah (marriage contract).

AUFRUF
One Shabbat prior to the wedding is commonly marked by the Aufruf; when the bridegroom is given an Aliyah – called up to the reading of the Torah. In former times he would have been showered with rice, wheat, nuts and candy, as a sign of fertility.
The parents of the bridegroom often invite their family, friends and the Synagogue congregants for Kiddush after the service.

In some families it is traditional for the bride and groom not to see each other for a short period prior to the wedding ceremony – this may vary between a day and a week. 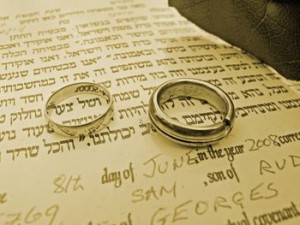 MIKVAH
A few days before the ceremony the bride must attend the Mikvah to immerse herself in the ritual bath, so that she will come to her wedding day spiritually prepared.
Family purity is the term popularly given to the laws involving a married women’s obligations to use the Mikvah during her married life. The regulations are considered by orthodox Jews to be basic to the Jewish way of life.
Contact the Mikvah Attendant via theShul Office » see also Mikvah

MARRIAGE CEREMONY
The marriage ceremony is one of our most festive traditions. Nevertheless, it is customary for the bride and groom to fast on their wedding day, with some exceptions, e.g Rosh Chodesh – the New Moon.
Indeed in some very religious families the bridegroom wears a Kitel, the white gown that is a symbol of the purity of Yom Kippur.
In many communities, including our own, bridegrooms wear a Tallit (prayer-shawl), during the ceremony.

Although in the United Kingdom most Jewish wedding ceremonies are conducted in the synagogue, in many countries the Chupah is performed outdoors, beneath the stars, as a reminder of G-d’s promise to Abraham, to make his descendants as the stars of the heaven. The Chupah may also be performed in a house or hall. 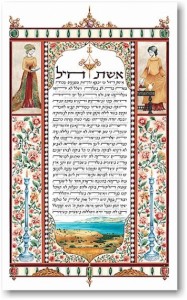 KETUBAH
The ceremony commences with the signing of the Ketubah (the marriage contract). The Ketubah which is written in Aramaic is an agreement witnessed by two religious men, in which the husband undertakes to support his wife.
The bridegroom then performs a symbolic act of agreeing to undertake his obligations. He does this by taking a handkerchief from the Rabbi, lifting it in the air and then returning it.
BEDEK
The bridegroom, in the Ashkenazi tradition [*A], is then accompanied by the men in the bridal party to Bedek the Bride. He places the veil over her face and the Rabbi recites the blessing given to Rebecca by her mother and brother, before she married Isaac. (Gen. XXIV: 64) The Rabbi also recites the priestly blessing over the bride at this time. The Bridegroom is then led to the Chupah.
In religious circles he may be accompanied by young men singing and dancing.

THE CHUPAH
The bride is then escorted to the Chupah, by either her father, her parents, or, in some cases, by the two mothers. It is for the young couple and their families to decide with the agreement of the Rabbi.
Usually the Chupah consists of a cover held up by four poles, which can either be on a frame, or are held by four men. The Chupah is open on all sides, and it symbolises the home where the bridegroom welcomes his bride. It has been likened to the home of Abraham, where, according to tradition, it was open on all four sides, which reflects one of Abraham’s greatest traits of hospitality.

UNDER THE CHUPAH
Many brides, on reaching the Chupah, circle around the groom seven times [*A], usually accompanied by some form of music. During the course of the Chupah the bridegroom places the wedding ring on the index finger of the bride’s right hand. The act of the giving of the ring seals the contract. This must be a ring that the bridegroom has purchased with his own money and not on credit.
It must be a complete band, and made of a plain metal (preferably gold) with no precious stones. There is no tradition for a bride to give a ring to her groom. This is a modern custom with no religious significance. However if the bride chooses to give her groom a ring, she should do so after the ceremony.

SHEVA BERACHOT
Following the recital of the seven blessings (Sheva Berachot), the bridegroom breaks a glass, to symbolise that even at a time of great happiness, we still mourn the destruction of the Temple. At this point the congregation shouts “Mazal Tov”.
The formal part of the ceremony having been completed, and the civil marriage certificate having been signed, the newly married couple are taken to the privacy of the Yichud room, where they can have a few quiet minutes of reflection together, when they would normally break their fast.
After this, the celebrations begin in earnest, and it is usual to have music and a meal at which the Sheva Brachot are again recited.

DECORUM / DRESS
Weddings are a time of great happiness and joy, but it is important to remember that the ceremony is a religious one and therefore the dresses worn by the bride and all the bridal party should be sufficiently ‘modest’. Also, during the ceremony, married women should keep their heads covered. The Rabbi can provide specific advice on the dress code.

N.B Couples planning to marry should, in the first instance, discuss the proposed wedding date with the Rabbi, to ensure that it satisfies religious requirements.

The Bride’s wedding outfit should respect the modesty dress code of the synagogue as should ladies attending the ceremony.