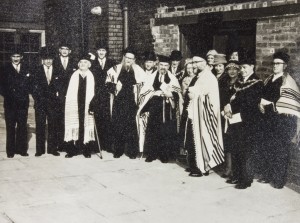 Whitefield Hebrew Congregation was founded in 1959 with a membership of 80 families. After a preliminary meeting at the home of Mr. N. F. Bower, in June of that year, support was confirmed at a public meeting in July and a Committee formed under the chairmanship of Mr. A. Gouldman. The Park Lane site was purchased and the original building, formerly The British School built 112 years earlier, was converted to a Synagogue with much of the furniture being donated by established Synagogues.

The first Service was held on Rosh Hashanah 1959, with Rabbi I. Freedman and Rev. E. Goodman officiating, and the first General Meeting in November 1959 elected Councillor Leslie Donn as first President of the Congregation. Accommodation was provided for Hebrew classes held under the auspices of the Central Board for Hebrew Education. The growing Jewish population necessitated an early expansion of the Synagogue to give a seating capacity of 420 persons and the enlarged Synagogue was officially opened on 11th September 1961 by Mr. I. Suppree and consecrated by the then Chief Rabbi, Dr. Israel Brodie. 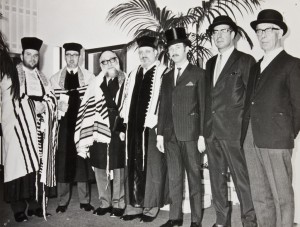 By late 1962 it was apparent that more extensive accommodation would soon be needed and although alterations had been made to the classrooms to provide space for additional Services on the High Holy days, the Council agreed to set up a sub-committee to explore the feasibility of building a new Synagogue.

Eventually, a New Building Planning Committee, under the joint chairmanship of the President and Vice-President at the time, Dr. P. G. Mann and Mr. Brian Marks, presented plans to the Council which were unanimously approved. Work commenced late in 1967 on the complex of Synagogue, Classrooms and Social Hall.

The Synagogue was officially opened by Messrs. Arthur and Walter Hubert on 27th April 1969 and consecrated by the then Chief Rabbi, Dr. Immanuel Jakobovits.

Our first Minister was Rev. E. Goodman, who served in a part-time capacity from November 1959, until his death on Chanucah, 1960 and the first full-time minister was Rabbi Dr. Norman Solomon, who was with us from September 1961 to July 1966. He was succeeded in June 1967 by Rabbi Dr. Simon Herman, who left the Congregation in August, 1971. 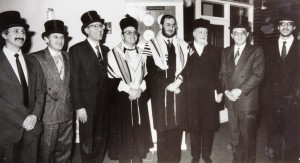 Rabbi E. S. Weisz was appointed in November, 1972 on a part-time basis. His appointment was made full-time at Pesach 1981.

Chazan Mendel Feingold, after a period of part-time service, was appointed our first full-time Chazan in December 1966.

Rabbi P. Lefkowitz served as Minister from September 1982 until June 1985 and was succeeded by Rabbi Jonathan Guttentag B.A.(Hons) who commenced his ministry in July 1987. He was formally inducted into office in February 1988 by the then Chief Rabbi, Lord Jakobovits.

After a long period of planning by the Building sub-committee chaired by Mr. Harvey Basger, September 1991 saw the completion of an extension to the Synagogue complex. This provided the community with a purpose-built Youth Centre, an enlarged Evelyn Lubin Hall, Bridal Room and Mikveh. The event was celebrated with a visit from the Chief Rabbi Dr. Jonathan Sacks and Mrs Elaine Sacks. A Keylim Mikveh was added at the end of 1992 and made available to the community. 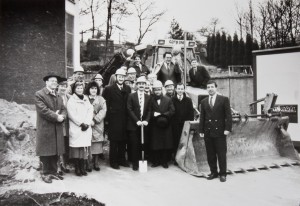 Work commenced in Spring 1997 on the refurbishment of the Amelan and Verber Hall. It was completed in July of the same year, providing an enclosed access from the Synagogue foyer and excellent facilites for smaller functions and meetings.

In 1998 the Evelyn Lubin Hall was refurbished and work began on extending and re-designing the Alan Sheff Beth Hamedrash, a necessary project thanks to an increase in both weekday service attendance and Kollel facilities available to the community.

Autumn 1999 witnessed three major events in the history of our community.

After 35 years of selfless dedication to the congregation, Chazan Mendel Feingold, his wife Davida and son Jeremy made aliya to be with their extended family in Israel. Hundreds of members and non-members attended a farewell reception held in their honour.

This period also saw the completion of the building of the Eliot Levy Memorial Ohel at Philips Park Cemetery. This magnificent structure now provides us with the facilities to enhance the performance of the great mitzvah of honouring the dead. Funding for this project came from both outside and within the community. 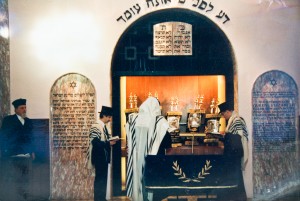 The 40th Anniversary of the founding of the Whitefield Hebrew Congregation was celebrated in February 2000. It was marked by way of a week long exhibition of photographs, documents and other memorabilia and a special Shul Service followed by a reception. Both the Whitefield Jewish Youth Centre and Whitefield Community Kollel joined the congregation at this time, to mark their 10th and 9th anniversaries respectively.

Guest of honour at the 40th Anniversary celebrations was the Chief Rabbi Dr Jonathan Sacks, who further marked the occasion by re-opening the now extended and completely re-furbished Alan Sheff Beth Hamedrash.

At a Special General Meeting of the members held in July 2001, Chazan Yosef Muller’s appointment as full time Chazan to the community was ratified. Chazan Muller, his wife Chani and their children arrived in Whitefield April 2002.

The official opening of the refurbished approach road to the Eliot Levy Ohel at Philips Park Cemetery took place in May 2004 in the presence of The Mayor of Bury and Ivan Lewis MP. The whole Congregation was invited to attend. 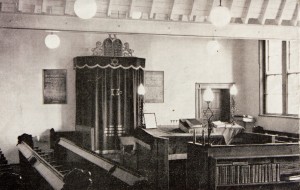 Our Golden Jubilee Year began on the first night of Rosh Hashana in September 2009, when Mr Leslie Berkeley, one of the original Founders of the Shul addressed the Congregation from the Pulpit.

The official Jubilee celebration took place on Motzei Shabbat 21st November 2009, when The Chief Rabbi, Lord Jonathan Sacks and Lady Sacks visited the Shul for a special Jubilee Service, conducted by Rabbi Jonathan Guttentag and Chazan Muller. The highlight of the service was the presentation of the Chief Rabbi’s Award to eight Senior Leaders of the Whitefield Jewish Youth Centre. The service was followed by a Cocktail Reception where the Chief Rabbi and Lady Sacks met many members of the Community.