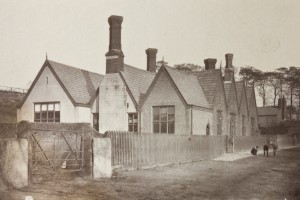 Having lived in Whitefield from 1942 and noticing that the Jewish community had increased by 1959 to a number which warranted an organised congregation I made this suggestion known through the Jewish Press.
As a result two gentlemen, who were hitherto unknown to me contacted me expressing their interest. One was the late Maurice Goldberg, who eventually became a Trustee and first Warden, and the other the late Louis Adelman who became the first Secretary with Ellis Pruchnie who left Whitefield to live in Cardiff. The three of us looked around the district to find suitable premises for a Shool .... the now demolished public house at the bottom of Higher Lane and The Beaches which became Pinfold Court.
Then one day, a very congenial character, the late Harry Saunders, wearing his usual carnation, knocked on my door and asked me to come with him to see George Gates, as he was selling the building known as the British School, next to his bungalow in Park Lane.
Although Mr. Gates said he had been offered £3,000 for the building and site, as we were going to use it for a place of worship he would accept £2,000 from us. Needless to say I purchased it and later on it was conveyed to the Trustees of the Congregation. 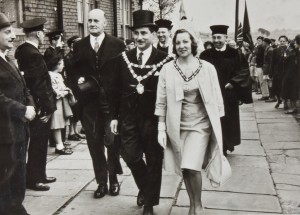 On 9th June 1959 a meeting was held at the home of Mr. Norman Bowers (later to become a Trustee) when it was agreed to hold a public meeting at the Higher Lane Primary School on 8th July for the purpose of establishing a Congregation to serve the community. The meeting was advertised. The families attending elected a Committee under the Chairmanship of a very experienced Synagogue officer, the late Mr.Abe Gouldman.

A lot of work had to be undertaken to transform the 112 year old British School, which had been used lately as a factory, into a Synagogue.
The enthusiastic founders did most of the work themselves, even to going down to the Steincourt Synagogue to carry back their old seating for installation in our new home. You really needed to have been there to witness and appreciate the wholehearted enthusiasm shown by all the founders. The Synagogue was only just ready for its first service on Rash Hashana 1960…. cleaning was being done until literally the last minute.

What a wonderful reward it was for the founders to see the 87 families converge on the Synagogue centre that Rosh Hashana and to experience that wonderful atmosphere of achievement and the prayers led by Rabbi Friedman and the late Rev. Goodman.

Hebrew classes and a youth club soon became established. But with a growing membership, now 147 families, the Synagogue area became too small and was enlarged to accommodate up to 420 persons. 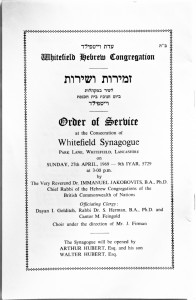 On 11th September the Synagogue was consecrated by Chief Rabbi Dr Israel Brodie, assisted by Cantor Bornstein and Rev Goodman. The official opener was Isidor Suppree. It was a most impressive ceremony which was proceeded by a large procession to the Synagogue. A celebration reception was held afterwards at the Stand Grammar School for Girls.

At that time I had commenced to send out my own monthly bulletin to the members and in the second, in October 1960, I wrote "It is envisaged that it will not be many years before we shall have to embark on a major scheme for a new Synagogue building".

The Whitefield Jewish Ladies Guild under the first Chairmanship of Mrs Jeanette Donn, and her successors, and the Whitefield Aid Committee, under the Chairmanships of Allan Aaronson, Jack Firman & Sidney Orchant, were busy organising fund raising functions. The first Dinner and Ball was held on 17th October 1960 at the Midland Hotel and raised somewhere in the region of £4000. This and subsequent functions provided the main funds for our new Synagogue.

At that time, in an endeavour to get better shool attendances, I coined a slogan, which was circulated in a bulletin to the members… “We need Praying members and well as Paying members”.

By 1961 the membership had grown to 203 and it was apparent that a full time minister was required. Rabbi Norman Solomons was appointed just prior to the High Festivals in 1961, the services being conducted by him together with Cantor Bornstein and a choir consisting of Morris Goldberg, Isidor Suppree, Stuart Basger, Nigel Donn and David Suppree. About this time Jack Brodie was the Secretary and the late Norman Abrahams the Collector.

The Synagogue, now with the beautiful singing of our young Chazan Mendel Feingold, attracted Jewish families to the district and naturally membership increased very rapidly.
A new Synagogue planning committee under the chairmanship of Mr Brian Marks, assisted by the late Frank Salisbury and others, got down to the serious task they had undertaken, and in 1966 the old building was demolished and a most beautiful Synagogue and Community Centre was built… a dream which the original Trustees Norman Bower, Maurice Goldberg, Isidor Suppree, Leslie Donn and many founders were spared to see come to fruition.

The new Synagogue was dedicated on 27th April 1969 by Chief Rabbi Dr Jacobivitz and opened by Mr. Arthur and Mr Walter Hubert. With the continual rise in membership on the High Festivals additional services have been held in the Social Hall ever since.

Now with a membership of over 550 families plans are afoot to extend the Social Hall to provide extra seats for the High Festivals and also to provide facilities for our young people. When this eventually takes place another milestone in the history of the Whitefield Congregation will be have been reached.

We are all greatful to our Rabbis Friedman, Solomon, Hermon, Weisz, our present incumbent Rabbi Guttentag and Chazan Feingold who incidentally will be shortly completing 25 years service, for the part they have all played in the spiritual guidance and success of our Congregation.

In my monthly bulletin of October 1961 I posed the following questions to the members;

1. Do my family and I attend the Synagogue as often as we can?
2. Do my children attend the Hebrew Classes and do they go regularly?
3. Have I signed a covenant for my subscription yet?
4. Have I given a donation yet? If not can I manage to do so whatever it may be?
5. Do I support the Congregation in all its efforts whether they may be socials, cultural activities or fundraising functions etc?
and concluded…

“If you can answer Yes to the majority of these questions, you are playing your part and there can be no doubt about the future of our Congregation.”

No nothing has really changed ... the questions and the answers 30 years on still apply.

Let us now pause for a while to remember those illustrious men and women who gave their time, energy and advice, in order to secure the founding of our Congregation, and all those who are now continuing in their footsteps to ensure its future.